Why Yogurt is Essential while Marinating a Meat? Either you are making a fried chicken or dunking chicken wings, or you want to make grilled lamb chops, you need to marinate the piece of meat with a few required and essential spices along with the Yogurt to give marinate a base and also use some taste enhancers like garlic, ginger, and chillies. You can either use a hung curd for the marination of lambs, and you can also use buttermilk to soak the Fresh Raw Chicken to make fried chicken or add curd to the gravy of fish curry to make it tangy. Therefore, Yogurt has an essential role in cooking an excellent meat recipe. You can use it in different ways, but the effect would only be great, and you will get an excellent recipe.

For a long time now, as people are evolving, the dishes also change the ways and methods of cooking them are also changing and so as the variations and types of marinades are also changing. In earlier times, during the First Babylonian Dynasty in 2000 B.C, there was a very famous dish: the deer stew. The marination was used of the bay leaves, cumin seeds, coriander, and red wine, and it was marinated for at least 24 hours and then cooked with various taste enhancers and spices. The marinations are different when we travel the world’s geography; let’s talk about Spanish marinades; they use the spicy adobo mix to marinate the meat. Portuguese used the authentic Goan Vindaloo to marinate the meat. The Koreans and Philipinos used soy sauce and used brown sugar, and lemongrass generously in Thai preparation. However, Yogurt marinates a very popular marinade globally, dominating the kitchens and marinating various meats. The Yogurt marinate more popular in countries like India, Iran, Greece, Turkey, and North Africa.
Yogurt marinades are used for meats since 6000 B.C.and, have a great gastronomical history and are most popular in Asia, Africa, and a few parts of Europe. Since now, as Indian cuisine is dominating the world, this yogurt marinade is used globally.

The Origin of Yogurt

Yogurt was invented during the 6000 B.C and by the Neolithic populations of Central Asia. According to various documents and evidence, the story goes as follows the herdsmen from the Neolithic use to carry the animal milk along with them in, and that was made out of animals originally. One day they saw the milk has curdled, then they tasted it and found the spoilt taste, and they then realize that it is a reaction of enzymes and naturally makes milk into curd. That’s how Yogurt was invented, and since then, it is used globally in various forms.

For a long time now, Indian cuisine has been using loads of marinades made from Yogurt and especially the Mughlai cuisine is cooked from yogurt marinades. Mughalai cuisine is a very interesting cuisine and has Mongol, Persian, and Indian cuisines.
Marinades are used along with the meats to tenderize them and act as agents that help cook the meat quickly and make the meat tender and juicier. The marinade is made from Yogurt with loads of flavours of dry spices and taste enhancers like chillies, garlic, ginger, inculcating flavour in the chicken, and making the meat loaded flavours. The best thing about the yogurt marinade is that it makes the meat juicy and tender to it and fills it with the flavour deeply, and makes the chicken moist from inside too.

Yogurt is also the safest acidic marinade, and there are a few other acidic marinades like vinegar, or wine, or lemon juice; you can also use them to marinate the Giggs Online Raw Chicken, and they very well make the meat tender; however, if the quantity we use is not appropriate in other words if we overdo it then instead of tenderizing the chicken, it would make it tough and dry and very chewy to eat. So, it’s always better to avoid the risks, use safe ingredients, and give you the best outcome. Apart from these acidic ingredients, there are a few ingredients that can also be used that tenderize the meat with the help of enzymatic action. However, if we overdo them, they will spoil the texture of the meat and make the dish unpleasant, so the best marinade option is Yogurt which will make your dish flavourful and maintains the texture of the dish and load your dish with aroma and flavours.

For a delicious meat recipe, what all you need is generous use of Yogurt and some aromatic spices and flavours and use them in balance so that the dish you get at the end is delicious and finger-licking tasty and makes your meat juicy and full of flavours. The longer you marinate the meat, the tender it would get and also becomes super delicious. 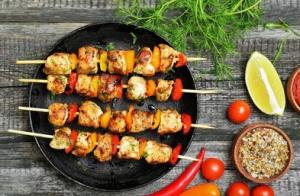 Chicken Sholay Kabab is a dish cooked in a masala dar batter and deep-fried till crispy. This spicy chicken kebab is garnished with crisp-fried curry leaves and served with raita. This dish can be served as an appetiser at a celebration. In this article, we will share the most delicious dish that is the Chicken […]

Your taste buds will fall in love with this delectable Rajasthani Style Mutton Banjara, which can be prepared quickly and easily in a pressure cooker in just a few minutes. The subtle combination of onions, ginger, and garlic, simmered with spices and curd, transforms this dish into something truly delectable. For an unforgettable weekend lunch […] 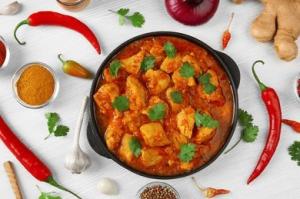 This spicy chicken curry recipe is a must-try for non-vegetarian diners who enjoy spicy foods. It is filled with flavor thanks to adding lemon juice, tomato puree, onion puree, Loads of ginger, garlic, green chilies, and various spices to this traditional Indian chicken curry recipe. About Spicy Chicken Curry Recipe Apart from tasting delicious, this […]

Chicken Sholay Kabab is a dish cooked in a masala dar batter and deep-fried till crispy. This spicy chicken kebab is garnished with crisp-fried curry leaves and served with raita. This dish can be served as an appetiser at a celebration. In this article, we will share the most delicious dish that is the Chicken […]

This spicy chicken curry recipe is a must-try for non-vegetarian diners who enjoy spicy foods. It is filled with flavor thanks to adding lemon juice, tomato puree, onion puree, Loads of ginger, garlic, green chilies, and various spices to this traditional Indian chicken curry recipe. About Spicy Chicken Curry Recipe Apart from tasting delicious, this […] 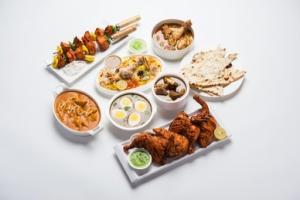 Our Skin is a mirror that reflects our most intimate feelings and thoughts. On the inside, when we are in good spirits, we exude warmth and delight to the outside world. The result is that one of the first organs to show signs of stress and sickness is our Skin! One of the most efficient […] 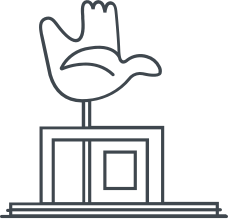